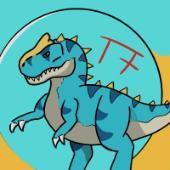 Hello Survivor ! We are happy to present the Nothosaurus, a giant amphibious lizard !     Behavior : This is a large marine lizard, which regularly comes out of the water to bask o

The Nothosaurus has the abilty for all wild eggs to have a chance be fertilized such as trike and trex eggs. If on your journey you want a trex but dont have enough trangs then steal a trex egg with t

This is by far the best concept for the notho.