By StudioWildcard,
September 2 in Announcements 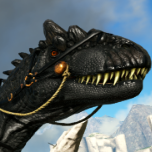 Beautiful. Hope the taming method for them won't be stupidly difficult, I don't want a second amarga situation of "I wasted three hours of my life, gained nothing, and you know what? You can stay wild

I hope it CANT grow bigger than a giga, look at the size of a giga already. it's already oversized if you compare it to a real world giga. leave the super sized megazords woopa dupah for mods, please.

Will we be getting one last TLC for creatures this year? I would really like to see some renewed models of some of the older models and I think it would really help them stand out of the crowd of newe