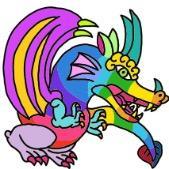 Sclerothorax hypselonotus was a temnospondyl amphibian that lived in Germany during the Early Triassic, around 251-247 million years ago.
Measuring about 1.2m long (3′11″), it had some unusual features for a temnospondyl – a very rectangular skull with a wide blunt snout, and elongated spines on its vertebrae that gave its body a sort of “hump-backed” shape.
It was part of a lineage of temnospondyls called capitosaurs, which mostly occupied the same sort of aquatic predator niche as modern crocodiles – but unlike its close relatives Sclerothorax’s well-developed spine and limbs suggest it spent much more time walking around on land.

It will appear in the new DLC free map.If the DLC's free map were implemented, it's probably in the swamp.
In ARK, it is a medium-sized animal in size and is considered a neutral amphibian.
However, it is hostile when attacked, and the Sclerothorax attack will always have a bleeding effect.
It actively preys on small creatures such as dodos, otters, and coelacanths, which has the effect of temporarily increasing its attack power.
Therefore, it is dangerous in the wild, but basically it is okay if you do nothing.
However, even if it has been tamed, if it is a small creature, it will aggressively attack, so you need to be careful about it.

It is a coma tame that stuns.
The bait is fatty tuna or marbled meat, and we do not eat fish, meat and kibble.
Above all, the tame rate is higher in the large Toro than in the marbled meat.

I think we need to add the most amphibians to ARK!