Dossier. I would have put it on here but the file was too large- 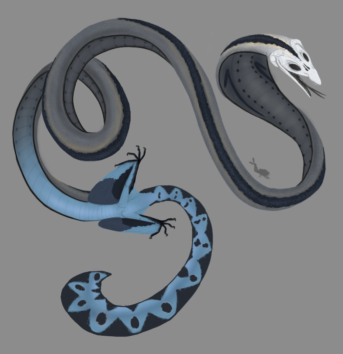 Pachyrhachis is a gigantic sea snake found in the open waters of fjordur. Though most effective in water, it is also very capable of moving on land.

During the day it stays deep underwater for protection, but at night it will rise to the surface. If you attempt to cross the water at this time on a raft, canoe or creature, you may find yourself surrounded by twinkling lights. If you see this, it's already too late. The lights will rhythmically shimmer in the water, and if you look at them for too long you will become mesmerised and unable to move for several seconds. This is exactly what the creature wants. 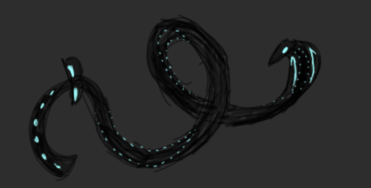 The serpent will encircle you, and begin wrapping around your boat or creature. If you're on a creature, you will be constricted and unable to swim, and your oxygen will drain rapidly as you sink. Creatures that do not have an oxygen stat will gain torpor instead. You are capable of attacking, but they will gradually get weaker as the snake overpowers you. However, if you manage to lower it's health to 50% it will let go of you and won't attempt to constrict again.

Rafts work slightly differently. The creature will begin constricting your raft but it will not sink immediately, instead it will slowly deal damage as you try to fend it off. You can attempt to attack the coils, but this won't be very effective. As the creature constricts the raft, it's head will rise from the water and attempt to bite at you. If you can deal enough damage directly to its head it will collapse into the water and its grip will temporarily loosen, until it recovers it's strength and goes in for round 2. This must be done 3 times before the creature will get the yuty fear roar effect and flee.

It takes 2× damage from projectiles when they are aimed at the head.

If you fail to slay the creature before it flees, the individual will turn spiteful and seek revenge. At night it will track you down, and is even willing to crawl onto land to reach you. It will keep this effect until it either kills you, or you kill it. However it is weaker in this state, as it too distracted by its rage to eat or sleep.

They are able to jump out of the water to grab onto flyers, but the creature will let go alot faster as the smaller pray isn't worth it. This also only occurs at night.

The creatures are too aggressive to be tamed by traditional means. Therefore, the only way to tame them is to raise them from birth. However, these creatures are ovoviviparous, meaning their eggs are incubated inside their body and hatch internally, to then be birthed. Therefore, the only way to get these eggs is to extract them directly from the mother.

To do this you must set out in a boat at nightfall, and lure the creature in using light (fire, electrical lights, glowpets, flareguns, etc). Once a favourable serpent starts constricting your boat, you must repeat a similar process that you use last time this happened. Only this time you need to use cannon balls. After three rounds the creature will loose consciousness, and sink into the water. Then you simply swim down and take the egg from its inventory. This is a slightly less gory way of representing you cutting it open.

For the sake of simplicity, all wild Pachyrhachis are female, and they're all gravid.

The egg must then be hatched back home, and the baby must be fed ammonite bile while it grows up, but will become less picky as adults.

To those who are brave enough to tame this beast, you are rewarded with a loyal and versatile companion, that can be used both in and out of the water.

Bite: a basic bite that will inject a venom that weakens a creatures defences and allows pachyrachis to deal more damage.

Constriction: will wrap around it's victim and prevent them from fleeing, works on land and in water.

Hypnotism: it will unfurl it's hood and flash it's lights to prevent it's victim from moving or attacking for several seconds. However, Pachyrhachis will be more open to attack as it tries to hypnotise another creature.

Projectile: it will inflate it's throat and vomit a glowing Blue liquid, which slows down its target and deals a small amount if damage.

It's saddle can be equipped with a canoe, which will make it look like it's a helpless canoe when swimming near the surface. This can be used to lure in enemy players who think they can get an easy kill.

It's saddle is three-person.

It will automatically activate it's bioluminescence at night, though this can be turned off in the creatures settings.

When on land it can be sent into a turret mode, in which it will coil up and stay still. In this mode it can be ordered to either use it's hypnotism ability or projectile vomit on enemy players or creatures. Also a much cooler way of storing it.

It gains a hydration buff, similar to a spino.

When it's being targeted by an enemy creature, player or turret, it's hood will unfurl and it will begin tongue-flicking more quickly.

It is immune to jellyfish stings.

Thank you for reading. It took me ages to complete the drawing so hopefully I haven't posted this too late. Remember to leave your own suggestions in the replies!