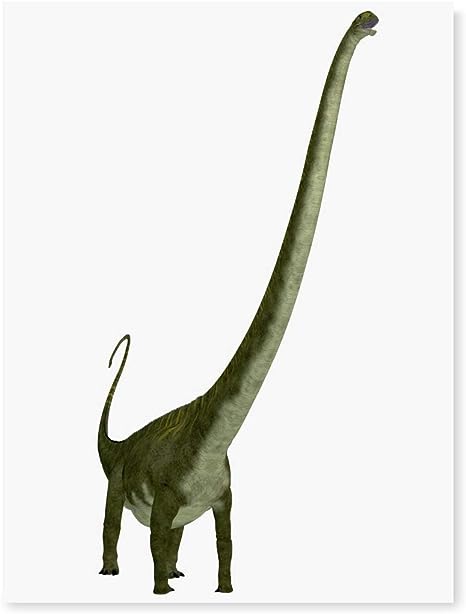 This guy is a sauropod with an incredibly long neck. Its Diplo-like body is smaller than the Bronto's, but its absurdly long neck makes it taller. It would have an HP pool at around 1,850 at level 1.

Mamenchisaurus can usually be found in places where their tall necks can be useful for feeding on new needle growth on tall coniferous trees. They are usually docile if approached, however, if attacked, they will either lash out at you with their tail, which will knock you back but leave you almost unharmed due to the low damage of this particular attack, or perform a Mammoth- or Paraceratherium-like stomp attack which will do very little to knock you back, but deal a considerable amount of damage. Also, interestingly, if you pass by its head high above the ground, like while riding a flying tame, the creature will look at you, confused (giving you an easy first headshot).

It's your average knockout tame, but being a sauropod, it wont go down without a fight. It will aggro you for an extended period of time and has a large amount of torpor. Unlike its cousins, the Bronto and Diplo, It does have a headshot multiplier. Since the head is located so far in the sky, it is safe to say that it would be rather hard to hit consistently. Once brought down, it takes crops and berries like any other herbivore would. Its preferred kibble is Superior Kibble.

Its large size allows for a regular saddle and platform saddle. Both of these saddles support two seats- yes, a two-seated platform saddle. The normal saddle has room for two people- one on the back controlling the movement, and another situated on the head, controlling head movement (up, down, left, right). This seat allows for a large range of motion that can help take aim at hard-to-hit creatures or opponents. If laid forward, it can create a bridge that can allow for crossing large gaps in terrain, up cliff sides, or depositing raiders over walls in a siege. This unique platform saddle, like the normal one, has two seperate platforms, controlled similarly to the normal saddle. The platform on its back is nothing special, being the same size as a Paracer platform. However, it appears to possess the necessary neck strength and musculature to support a second, smaller platform on its head, big enough to fit a single foundation on it. Due to the fact that its head movements can be controlled independently, structures and emplacements like cannons can be aimed to fire accurately in almost any direction. This is a blessing for raiders, who can simply aim the head down from over a protective barrier and fire away at the hapless structures and tames within with impunity. There is also a ladder placed on the back of the neck connecting the two platforms for convenience. Building downwards from the platform is a useful strategy too, protecting the vulnerable head from attack and making it look like your Dino has a gleaming helmet of their own! However, structures placed on the head have increased weight due to the strain it puts on its neck.

Oxygen: Who cares, its head is a snorkel anyway, allowing it to be able to breathe at lower depths than usually possible.

Thanks for reading to the end, and have a nice day!