Of all the giants I've seen on the island, very few can compare to the majesty of the Giraffatitan. I first saw one of these creatures while travelling across the grasslands, but I heard it even before I saw it. The ground shook like an earthquake with every step it took, and it towered above the trees, even making brontos look small in comparison. They showed no interest towards me, and upon further observation, proved passive towards humans. However, they become extremely aggressive towards large carnivores. I witnessed a giga attempt to hunt a herd of these giants, and instead of fleeing in terror, they charged the beast! Led by the alpha male, they unleashed a piercing trumpet that brought me to my knees and left me disoriented, even from my observation spot far away. The alpha then reared up and proceeded to smash the giga's head like a watermelon. After further research, I can conclude that it's actually the spines on the back of its head that allows the Giraffatitan to make such loud calls, vibrating them to achieve different pitches.

These calls are often used by the Giraffatitan to help it navigate its surroundings, much like whales do.  When they detect a threat, they pursue it mercilessly. Although due to their large size, very few creatures even dare to be near them. They travel in herds of three, led by an alpha male. They spend most of their time eating, and as far as their territory goes, I've seen them range from the redwoods to the swamps, and all the way to the prairies. I've even seen them in the snowy regions of the north, if you can believe it!

The sheer size and power of this dinosaur makes it a desirable target for any tribe. It can easily destroy the walls of any tribe's camp as well as buildings, it can even crumple metal like it was made of paper. For the more peaceful tribes, it's an excellent beast of burden, able to fell trees with ease to allow them to harvest their valuable sap. But its most desired quality is its defending nature. I've heard how shepherds used donkeys to defend their flocks from predators, and it seems this creature does them same. When a threat comes near, it's the females who sense it first and sound the alarm, while the male Giraffatitan will let out an alarming bellow that often frightens away most wild dinos.

Some tribes have even taken weaponizing this creature a step further and modified a saddle for it that shoots harpoons. The rider sits safely on the creature's back and can fire multiple harpoon types from both sides of the Giraffatitan. I've seen fire-tipped harpoons and poisoned harpoons used so far, but who knows how many more could be made? It is a slow creature though, so it is often when in a war party, the giant is protected by smaller, faster tames to protect it from being overwhelmed. The power of this animal combined with its defensive capabilities makes the Giraffatitan the desire of any tribe.

Game abilities: Alpha buff for highest level male, female ability to detect other creatures and identify threatening ones, male ability to trumpet a sound that uses the fear effect and boosts other Giraffatitans in its herd, boosted attack against structures and large carnivores, its forward smash drops sap when used on one of the giant redwoods.

Attacks: Depends on where camera faces but includes normal front stomp, tail swipe, back kick, and a  special attack that rears the Giraffatitan up on its hind legs, can possibly move forward in this position and then smash down doing high levels of damage.

I hope you like my ideas for this dinosaur! Let me know your thoughts on my idea and if it could be improved. 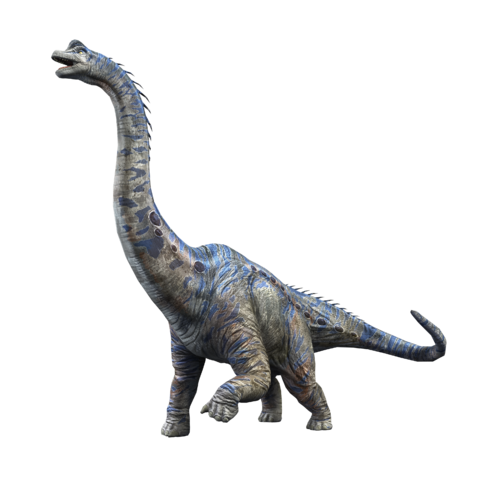