Another community chosen dino for the newer map Fjordur. 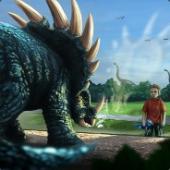 By Morikar,
November 11, 2021 in General Discussion