MY IDEA
Mapusaurus is a massive carcharodontosaurid carnosaurian dinosaur from the early Late Cretaceous that was on par in size with other carnivores such as Giganotosaurus. Because Mapusaurus were only slightly smaller than Giganotosaurus in real life, I wanted my concept to turn Mapusaurus into the perfect rival for ARKs massive apex predator that is the Giga. It's only slightly smaller than the giga, and from a distance they would look to be essentially the same size when standing next to each other. Despite being nearly the same size, Mapursaurus doesn't do as much damage as the giga, dealing slightly less damage per second. It has a massive stomp attack that does bonus damage to anything smaller than itself and it also has a roar attack it can use every 30 seconds that stuns creatures for 10 seconds, and this stun also works on the giga. This stun would allow Mapusaurus to catch up in damage if it were to be fighting the Giga. It isn't superior to the giga, nor is it a counter to the giga, but it is highly capable in its own way. It would also be immune to regular narcotics, making bio-toxins the only effective way to knock one out in order to begin the taming process.

DOSSIER TEXT
WILD
Mapusaurus is a formidable and terrifying beast, an apex predator unlike anything I have ever come across in my time on the ARK thus far.  What makes it even more nightmarish is that it also appears to be slightly bigger than Giganotosaurus.

If you see a Mapusaurus in the wild, run as fast as you can immediately. Mapusaurus has an arsenal of tools at its disposal that allows it to dispatch nearly anything that it crosses paths with. For creatures smaller than it, it has a viscous attack where it ferociously stomps the ground around it using all of its body weight. For creatures larger than itself or of similar size and stature, it has a roar so powerful that upon hearing it, everything around it will become disoriented and dazed as they try to regain their ability to hear properly.

D0MESTICATED
Taming Mapusaurus is a dangerous prospect. They seemingly have a natural resistance to narcotics due to their hyper-energetic nature, and can break through most structure types with their stomp attack. Yet the sheer size and immense power that the Mapusaurus possesses makes it worth the risk! 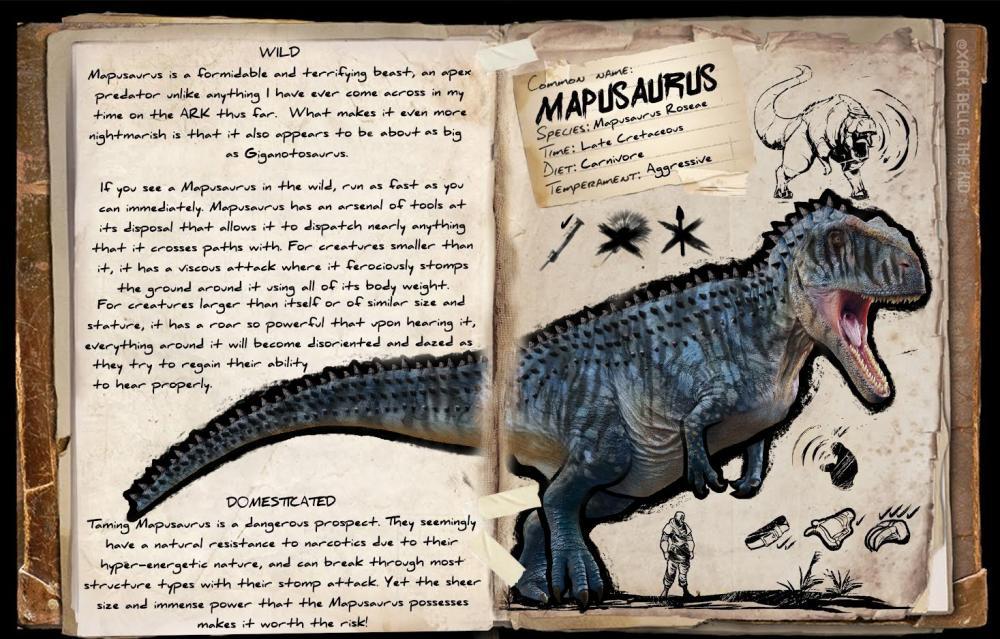 Edited December 11, 2021 by xackbelle
my title got changed somehow