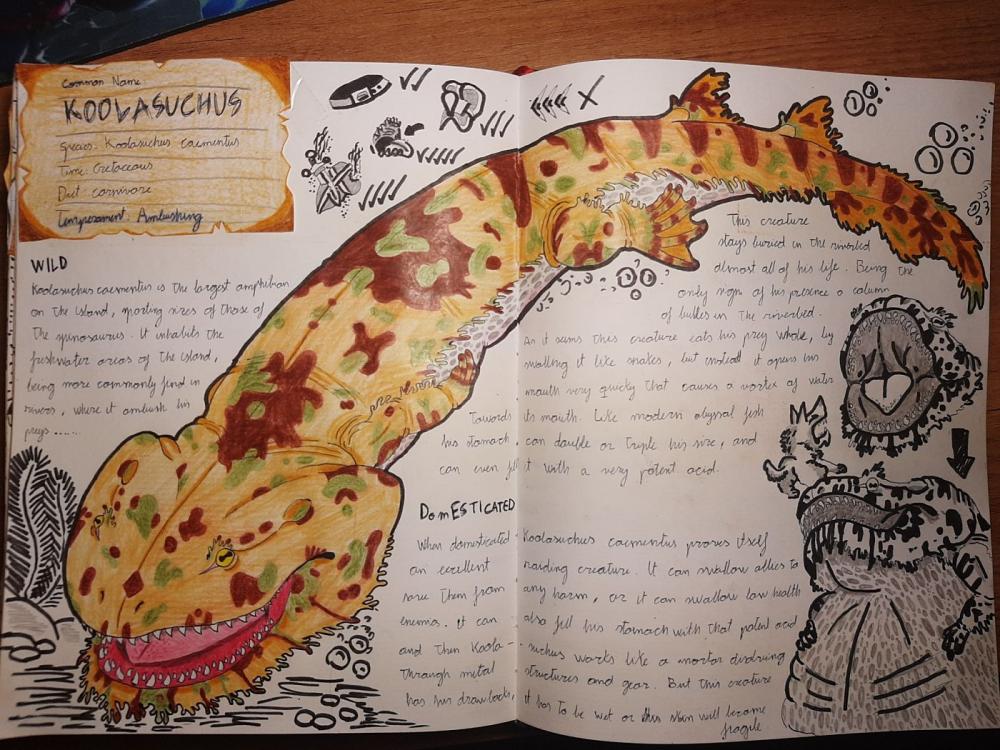 This dossier is made by me, also sorry for bad quality (only let me post 400 kB)

Koolasuchus Caementus is the largest amphibian on the island and also the most gluttonous creature i have seen so far in the ark, sporting sizes of those of spinosaurus. It inhabits the freshwater areas of the island, being more commonly found in rivers where it ambush his preys..... These creatures stays buried in the riverbed almost all his life. Being the only sign of his pressence a column of bubbles that emerges from the riverbed. This titanic amphibian eats his prey whole, the creature opens his maws so quickly that it causes a vortex of water that leads his preys directly to his mouth. Like moderns abyssal fish Koolasuchus Caementus can double or triple the size of his stomach in order to eat preys that are even bigger than him, this sometimes leads to koolasuchus sofocating due to the extreme size of his prey.  These creatures are so gluttonous that they eat everything that gets in his way, causing them to eat valuable resources, armors, weapons, etc.... Some survivor hunt them to get these valuable resources.

When domesticated Koolasuchus Caementus proves itself as an excellent siege and support creature. It can swallow allies to save them from dangerous situations or, it can swallow enemy mounts or survivors!!!, but this incredible ability comes with his drawbacks, if Koolasuchus has swallowed an enemy or a ally, it becomes sluggish and more susceptible to damage. Also Koolasuchus can fill his stomach with acid and then it can shoot that acid as a mortar, disolving through metal structures and gear. But as said, Koolasuchus Caementus comes with probably his biggest drawback, Koolasuchus has to be wet most of the time or his skin will become fragile.......

Now lets explain everything in detail:

Koolasuchus can be found in rivers and is a passive tame, the only sign of his pressence would be a colum of bubbles that emerges from the riverbed, in order to make Koolasuchus emerge from the riverbed you will have to carefully place honey in front of him, or you will ruin the taming (i will explain this later), when Koolasuchus has emerged from the riverbed it will start to swim around, sometimes it will open his mouth, is then when you have to swim to his mouth and feed it with his favourite food honey or prime fish meat (I haven't deciced yet), after sometime you will have a tamed Koolasuchus.

Now i will explain the two states of wild Koolasuchus:

- Aggresive Mode: If you come to close to Koolasuchus when is buried in the riverbed, it will start attacking you, so you have to be extra careful when placing honey in front of him, when Koolasuchus is aggressive it can't be tamed, this means Koolasuchus will not reset, and will be aggressive for all eternity, disabling taming forever. But when this state is activated, Koolasuchus will drop valuable resources when killed like said in the dossier (The rarity, number of items and the value of the items will depend on Koolasuchus level).

- Taming Mode: This state is activated when Koolasuchus have been unearthed from the riverbed with honey. As said Koolasuchus will start to swim around the area opening his mouth casually, letting the survivor to feed it and tame it.

- Space bar( Mortar mode): Koolasuchus will fill his stomach with acid, making it more vulnerable, and preventing it from moving. When this mode is activated, the rider of Koolasuchus will be granted a bird's-eye-view (like exo-mek). When this is activated Koolasuchus can launch acid balls to a determined position, making tons of damage to metal structures and gear, this attack is also capable of damaging tek structures. To cancel mortar mode press space bar again. To not make mortar mode OP in offline raiding (credits to Mangost for the idea) I've thought of two ways to make Koolasuchus fair for everyone, the first way would be that in order to shoot acid balls Koolasuchus would need a new item called Koolasuchus acid, this item would be passively generated inside Koolasuchus inventory each 30 minutes or so, this item would be stackeable. The second way would be that for each acid ball that Koolasuchus shoots it would lower its food stat, something like daedon with healing allies.

- Pressing C(Acid ball and acid pool): When pressing c, a bar will start to fill, when filled totally Koolasuchus will fire a short distance acid ball, that deals less damage than mortar mode. If this ability is cancelled while charging Koolasuchus will make an acid pool around him, preventing melee enemies or mounts to attack him.

Here we have some old sketches and concept art of Koolasuchus Caeementus, this led to the dossier at the top of the submission: 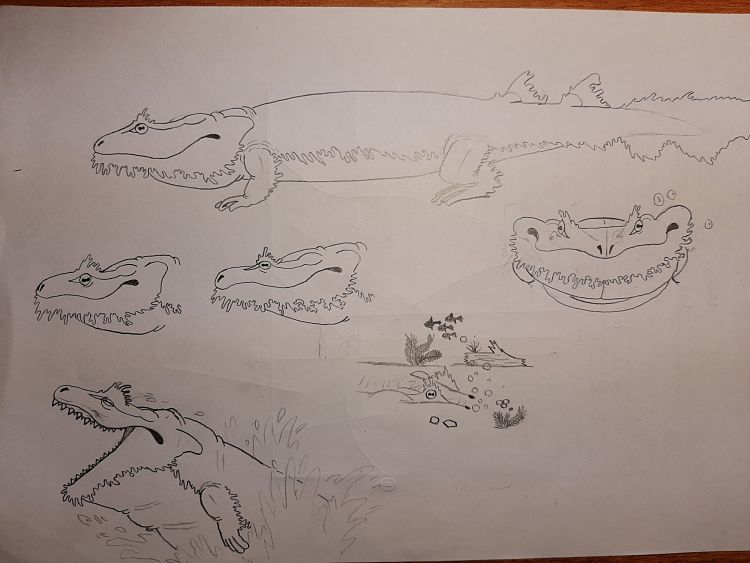 And again sorry for bad quality

And thats my submission for Fjordur, this creature was also in lost island submission. I think we need more amphibiand in the game, right now we only have two amphibians in the game (diplocaulus and beelzebufo), and i think a giant powerful amphibian would be a neat addition to the game. I based his design and colors on carpet sharks.

Having Koolasuchus is Fjordur would be very cool as a sluggish winter amphibian, this would explain his massive size. Also it would be a neat reference to Walking with dinosaurs, specifically to episode 5 (Spirit of the ice forest), where a Koolasuchus makes an appearance.

Edited November 10, 2021 by Flutox
adjustments to text, and getting things clear, sketches and concept art added