(I'm submitting it again before someone tries to hoard the taxa like last time, i.. Put a lot of work into this.) 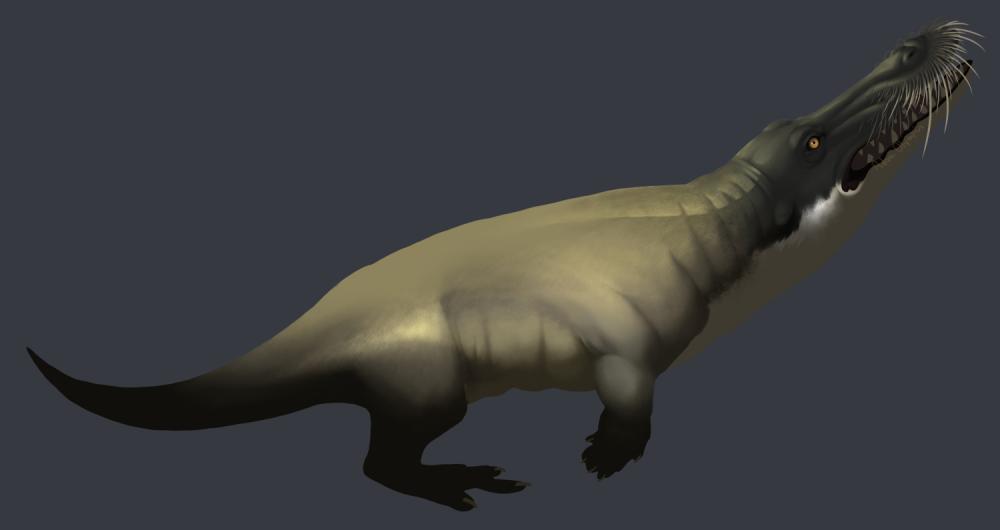 I believe this animal could be a good semi-aquatic light tank, with high damage and respectable health for its size. I imagine the species featured in the game would be around the same length as the Kaprosuchus, just large enough to be rideable, but more manoeuvrable than the larger aquatic tames. The player could be laying down on the saddle rather than sitting, not unlike some other aquatic mounts.

As for it’s vibes, i’m thinking of maybe something somewhat cryptid-like, as underwater mammalian monsters seem to be a common pattern in urban legends, and pictures of whale carcasses are sometimes mistaken for the remains of fantastical creatures (one such picture being well known online as the inspiration for SCP-682).

I gave my design a prominent whisker “mustache”, as I thought it would make it stand out from other Ambulocetus depictions while still looking plausible, but also because a useful gimmick could probably be attached to the idea of a mammal with very sensitive whiskers.

Perhaps Ambulocetus could be capable of sensing nearby creatures when pressing a button, in a similar way to the Federation helmet scanner, but only when Hydrated.

In addition, it could maybe act in a way similar to glowpets, automatically indicating the presence of certain kinds of creatures (Max level ? Rare ? Highly dangerous ?..) near the player mounting it [this would be an idle ability that does not require it to be Hydrated.]. If a player is not mounting it, no status indicator would show, but the presence of something could still be hinted at by a noise and/or animation (whiskers wiggle ?).

Edited November 8, 2021 by AdamOlympius
Made text easier to read through and added link to HD pics