Starwing strike alpha is impossible after the last update. 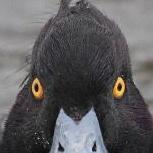