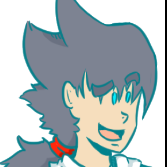 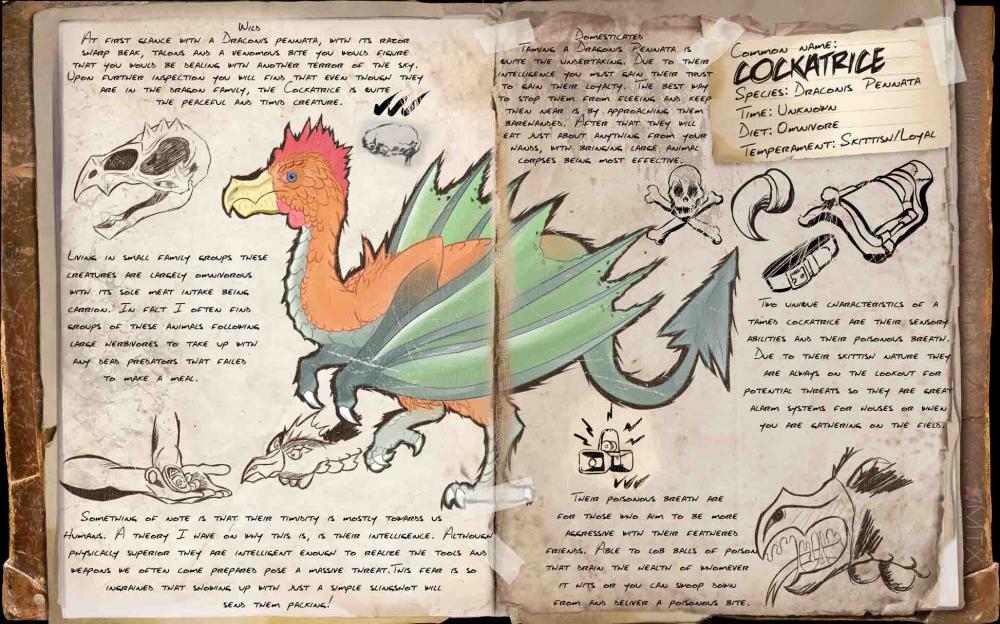 Wild
At first glance with a common Draconis Pennáta, its razor sharp beak, talons and a venomous bite you would figure out that you would be dealing with another terror of the sky. Upon further inspection you will find that even though they are in the dragon family, the Cockatrice is quite the peaceful and timid animal.

Living in small groups these creatures are largely omnivorous with its sole meat intake being carrion. In fact I often find groups of these animals following large herbivores to take up with any dead predators that failed to make a meal.

Something of note is that their timidity is mostly towards us Humans. Frightened one and the whole group will scurry off! A theory I have on why this is, is their intelligence. Although physically superior they are intelligent enough to realize the tools and weapons we often come prepared with could pose a threat bigger than any creature on the Island. This fear is so ingrained that showing up with just a simple slingshot will send them packing!

Domesticated
Taming a Draconis Pennáta is quite the undertaking. Due to their intelligence you must gain their trust to gain their loyalty. Approaching them barehanded is the best way to stop them from fleeing, enough time in their presence and they will start curiously coming to you! After that they will eat just about anything from your hands! But the best way to win them over is bringing large animal corpses to offer.

Once you have gained the trust of a Cockatrice you will have quite the loyal partner! I have seen Hunters and Gatherers alike use these beasts for various purposes. A tamed cockatrice is quite a versatile flyer, with a great soaring speed.

Two unique characteristics of a tamed cockatrice are their sensory abilities and their poisonous breath. Due to their skittish nature they are always on the lookout for potential threats so they are great alarm systems for houses or when you are gathering on the field.
Their poisonous breath are for those who aim to be more aggressive with their feathered friends. Able to lob balls of poison that drain the health of whomever it hits or you can swoop down from the skies and deliver a poisonous bite.

-The cockatrice is a fairly rare Dino that can be found in most regions where large herbivores could be found, preferring open ranges to watch out for threats.
-They spawn in groups of 2 to 4.
-Their size is fairly similar to that of an Argent but in terms of bulk is rather thinner.
-There skittishness only applies to humans within a certain range whom have "Any" tool or weapon in hand. Getting to close with one in hand will cause the group to flee just as a Tapejara would.
-Those whom approach barehanded will ease the creatures nerves. Eventually they will land and approach (much like an Ichthyosaur).
-Feeding them anything from the last item in your hotbar will stop them from losing interest and walk away.
-Being an opportunistic animal, when feeding them they will take just about any food item from you, but the quickest way to tame them is pulling animal corpses as carrion is a favorite amongst them.
-Other then to Humans, the Cockatrice is a very neutral animal. Although being attacked by anything but a human will cause the group to attack with great ferocity! (Any carno or Rex would be dealt with by a group of angry Cockatrices)


The Cockatrice has a few qualities that makes them an interesting tame.
-The Cockatrice can sprint on land with its move speed being somewhere around the speed of a Raptor or a Direwolf.
-The Cockatrice has the ability when on land to move backwards.
-Tamed Cockatrices will eat generally any food item, namely meats and berries but an item that restores a lot of food is Spoiled meat(Which will also play into their poison mechanic.)
-In terms of speed the cockatrice is a fast flier, having similar speeds to griffin.
-The Cockatrice does have the ability to dive like griffin or snow owl but how they differ is the speed they get is lower then either but the amount of time holding that speed increase is much longer supporting a more long distance soaring then the constant bursts of speed.
-While the weight of a cockatrice is by no means terrible they fail to best the Argent, let alone a quetzal. They also have no ability to grab any creatures.

The Poison and Sensory Abilities.

-Pressing crouch(or x) will activate the Cockatrices sensory abilities.
-When preforming this they will do an action that's a mix of a troodon and a Parasaur. Taking a moment to look around and detecting hostile dinos and players. Afterwards they will more with an icon where they are located indicating a Hostile Dino or Player.

Afterword
I worked hard on this concept for a flier that appeals to me as I am a lover of the flying dinos. The reason for them being able to sprint so to provide a kind of traveling partner that can be used for all sorts of terrains on land as most if not all fliers feel useless on land. If there are any things that bother you about this post or feel should be changed please let me know as I'd love some form of discussion about this little chicken.