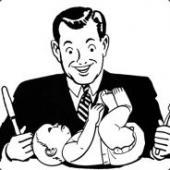 I believe this would be a worth while addition.  It makes sense for the creature. Frankly I think it would be neat to watch a bunch of fecal roombas racing around my base cleaning and making fertilizer.  Just a quick thought.