fanfiction The Stargate, The Adventure Continues. 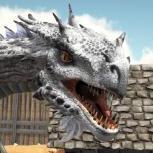