Creature updates: there are 7 creatures that I think deserve some new things and while some people may not agree with these I think it'll be helpful to keep them unique with the brand new creatures in the remake and these are in order of most important to least important.

1.The Phoenix should have improved stats since it's so hard to get and could use abit of a remodel maybe with the ability to land.

2.Lymantria attacks should have a torpor effect so that they could be fantastic for helping knock out creatures or on raids by carpet bombing your enemies with torpor gas, maybe abit of a remodel would be good as well to make them abit more thin with more detailed faces and wings.

3.Deathworms could use abit of a new model update like it getting a mouth like in the Scorched Earth cover art and it could always be visible with it occasionally roaring and maybe a Electricity AoE ability that damages unless you either get out of the electricity field, are flying, or jump onto something like a rock and the alpha deathworm would have the largest electricity AoE radius, they should have a fear roar ability where they can cause creatures to flee (they could cause all but the strongest creatures to flee in fear) and the Alpha Deathworm would scare away all tames but the Giganotosaurus, Reaper King, Titanosaur, Sandworms, Minotaurs and the 3 Titans.

4.Lightning Wyverns should gain a buff when theres electricity storms it gains a stronger larger breath attack and goes into a supercharged state with electricity surging around it, it should also have a tek variation instead of the Fire and Poison Wyverns and shock darts/stun rods should heal them slightly.

5.Poison Wyverns should be resistant to torpor damage and have a buff where overtime poison will build up and when it does the push back with its wings it'll push out poison gas that'll deal torpor for a short time before evaporating.

6.Fire Wyverns should be partially immune to all fire damage not just other wyverns but fire weapons and the Phoenix as well and the Alphas should be immune entirely.

7.The Manticore boss should have afew quality of life design improvements to better match its boss hologram maybe abit of a stat boost too since the Manticore is so frail compared to the other bosses before it despite looking the most intimidating (at least 1/3rd stronger).

New Creatures: There are a total of 5 new creatures and 4 new variations that I think could be added that fit into the general theme of the expansion and be exclusive to scorched earth and I picked them based on the general theme and what felt like would fit into the expansion without being out of place, ontop of that 3 of the creatures are mini bosses similarly to the Iceworm Queen, Lava Golem and Spirit Animals on Ragnarok.

1.The Minotaur would be the Giga of Scorched Earth and give Scorched Earth a creature that can compete with the Giga and Reapers and lore wise just to show it, it could "battle" a Deathworm but it rips it out of the ground and bashes it to death, stat wise it could battle a wild Giga it would be weaker but it would definitely put up a fight and it wouldn't really rely on any buffs like the gigas bleed damage or the Reapers defense buff it would just be insanely strong physically and tough and hit like a freight train completely ignoring armor buffs including saddles and break armor quicker, it would have a body somewhat like a werewolf with no form of cloths or ability to speak like a steryotypical Minotaur and no weapons like battle axes like the Pixark version it would just punch, stomp and charge things to death, it would charge getting on all fours similarly to the Dragon boss and charges destroying any natural obstacle in it's way like rocks and damaging creatures/structures and it would pick up speed the longer it charges, it should definitely be capable of destroying metal but maybe not tek, size wise the normal one would be slightly smaller than a Mek, it would also have a special mini boss variation that would be the dungeon boss of a updated Ruins of Nosti cave called the Ancient Minotaur that would be slightly larger than a Mek but smaller than the Hydra. This variation lore wise is battle damaged from fighting the characters within scorched earth's story as it constantly hunted them down throughout and battled other creatures native to scorched earth so its scarred and damaged looking, stronger, and larger than a normal Minotaur (basically a Alpha Minotaur) and due to the base Minotaur already being very powerful it wouldn't have any minions during the fight, it could also have a trophy head like the Deathworm and Wyverns.

2.The Hydra would be the second new mini boss which would appear in a brand new dungeon I've called the Catacomb of Serpents that begins from the hole in the Coliseum city that in the remake would be open. Its lair would be a area in the dungeon filled with alot of water and it would have 3 attacks, the first is a basic bite attack that deals torpor damage, second would be a spread poison breath attack having the spread damage of a Fire/Ice Wyvern but does torpor damage like a Poison Wyvern, and the final is a attack where all of its heads do the spread poison breath attack making a massive cloud of poison infront of it that would tear through health, it could also summon Titanoboa as minions maybe too or not, size wise it would be the tallest and the longest of the 3 mini bosses, It also could have a trophy like the Minotaur where it's the base of the necks with all the heads sticking out.

3.Cockatrice would be a new creature that when ridden would reduce the heat by one heat level, so let's say your in super heat when riding it, it would reduce it to heat or heat to warm and etc so it would definitely be a creature your going to want to tame eventually.

4.Gargoyles would be a creature that will roam around the map at night Similarly to troodon but you can find them in caves often, they could fly and walk around and maybe be a passive tame where you'd have to tame it with cementing paste, size wise they would be as tall as a Gigantopithecus with the wingspan of a Pteranodon and long tail and have a weaker version of the reduced physical damage buff that the Rock Elementals have so basically weaker and smaller but easier to get rock elementals that can fly.

5.Scarabs will ALWAYS be found in dungeons especially the old tunnels and will be one of if not the smallest creatures in ark, they will be extremely frail however they come in large packs and deal alot of damage so using a weapon like a flamethrower would be extremely useful against them, they cannot be tamed and they have the third and final miniboss for the expansion remake, a Scarab Queen that's extremely tough, can fly, and summon her legion of Scarabs to attack you, you can fight her in the revamped Old Tunnels cave, size wise she is the smallest of the mini bosses being 1/3rd smaller than the Broodmother in height but noticeably longer maybe around a Broodmother and a half long. Like the other mini bosses it could also have a trophy.

6.Sandworms could be a special Deathworm variant that instead of burrow under the ground could slither around and attack (basically a Iceworm Male reskin but slithers around now and could have a similar model and animations to the Basilisk model with afew differences like the mouth animations, afew idle animations, and attack animations, they could be tamable unlike the normal deathworms.), they would obviously be weaker, smaller and easier to kill but would definitely be cool since in the cover art I linked to this page shows a deathworm doing that, as well as that the AoE electricity ability would also be nice on them (bite attack, Electric Field attack and a Roar ability) the Roar ability would debuff creatures up to things like Rex's and brontos however it wouldn't make them run in fear like the yutyrannus, the Deathworms, Alpha Deathworms, and the Iceworm Queen.

8.Alpha Mantis because I feel like the Mantis is one of the more memorable creatures from Scorched Earth and deserves a Alpha alongside the Wyverns and Deathworms.

Map: the map could use abit of a TLC and could use afew brand new/updated locations in the list below

Items: I think they could add something along the lines of maybe eight a Tek land vehicle (think immortal engines if you've seen that movie) that could act similarly to the raft where you can build on it, quite afew people want a tek wyvern saddle, tek water irrigation, tek forge and etc.

And I think with the remake they should add the ascension everyone's been wanting, personally how I would execute it is after beating the manticore the player would start to ascend but since you'd be ascending to a broken ark obviously it wouldn't work so well so instead of being like the island the survivor starts seeing flashes showing areas of aberration like the radiation zone, the teleportation device in the entrance of aberration, a ground view of the broken obelisk from the surface and afew other things before cutting to black instead of showing the survivor on aberration.

Also when you beat the manticore you should gain plus 5 levels like in the island map and aberration.

Realistically people wouldn't suddenly just take breaks they would keep training and getting stronger plus it'll allow players to get more things from the expansions instead of being limited, same with extinction.

Finally I touched up on it abit in the deathworm/sandworm descriptions but I want to talk about the Iceworms abit.

They should still burrow unlike the sandworms and be untamable still however they can still inflict the roar debuff and instead of the Electricity AoE they could do a Nitrogen Mist AoE which slows down tames/players and damages them.

The Iceworm Queen however will have that but with the ability to freeze players and tames similarly to the Ice Titan and it would have the normal fear roar ability to scare away creatures and not just the debuff ability.

For creatures I think the list is pretty strong but if you feel like there's anything that should be in there for items, revamped/new areas, and creatures then add it into a comment below. 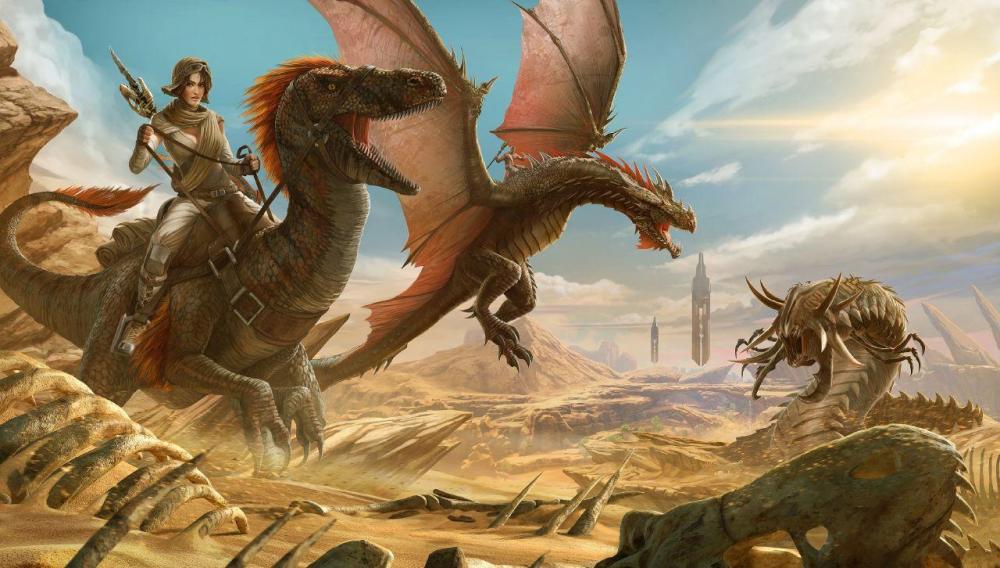 56 replies to this server topic