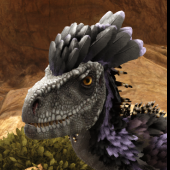 Aberration should get the Megalania! After all the file for an Aberrant one already exists and it looks super cool, so don’t let that work go to waste! Before you said that you did not want it to steal the limelight from the Rock Drake(which I still don’t think it would do as it is much slower and can’t glide/go invisible) but you have since added the Managarmr to Aberration (which you should undo). The Megalania, like the rock drake now, is not used…..I have NEVER seen one tamed in PVP since they are so useless. Aberration would be the Megalania’s time to shine, perfect for solo players who do not have the resources to acquire Rock Drakes and still allowing them the ability to transverse walls. The addition of the Megalania would be like the addition of the rideable moschops, nothing game breaking but just something neat and convenient. Add the Megalania to Aberration for a fun twist!