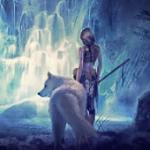 IM super excited to play the new dlc. you should add mermaids to the game. they could gather tools and black pearls and normal pearls. and catch fish for you maybe even oil.  they could live in a